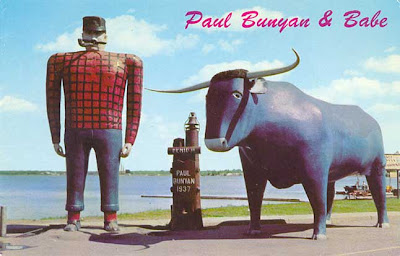 These huge figures of steel and concrete built on the shore of Lake Bemidji are emblematical of the days of the early lumberjack who originated lumbercamp whoppers of Paul and Babe that have been handed down for generations. These stories, never heard outside the haunts of the lumberjack until recent years, are declared by some literary authorities to be "the only true American myth."

Posted by Postcardy at 6:00 AM

* MAPS & LODGING on MONDAYS!
* TRANSPORTATION on TUESDAYS!
* FOOD on FRIDAYS!
* SIGNS on SATURDAYS!
* COMICS on SUNDAYS!