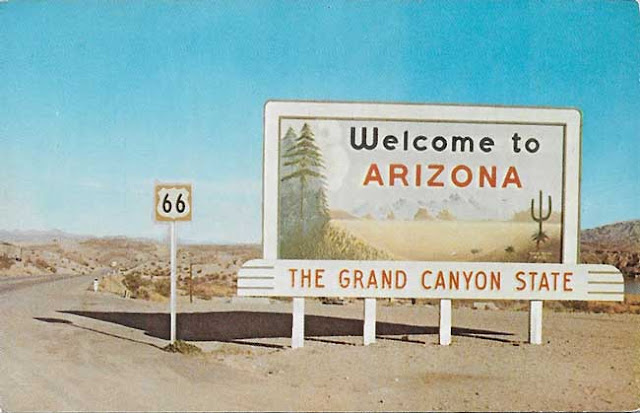 WELCOME TO ARIZONA
Ariaoona is a young state but an old country. Organized as a territory in 1863, it became a state in 1912. It is a state of contrast. While mountains tower over a mile high; the rivers have cut miles deep into the earth. Modern planes fly over Indian lands where people live as they did hundreds of years ago. There are great desert areas but the state has the world's ;argest [ome fprest/ Ancient civilizations have come and gone but they left their mark in the state. There were the Ancient Ones who built irrigation projects and built cliff dwellings. When we talk of an Arizonian who do we mean, the Indians who were here first, or Mexicans, who may be descended from seventeenth century invaders? Do we speak of the pioneer who had to fight every step he went west, or do we talk of the person who came here in the 1950s and '60s . . .M.P.

Posted by Postcardy at 6:00 AM

* MAPS & LODGING on MONDAYS!
* TRANSPORTATION on TUESDAYS!
* FOOD on FRIDAYS!
* SIGNS on SATURDAYS!
* COMICS on SUNDAYS!